*I know there are a lot of Stay At Home Dads out there too. I have written this from my point of view as a mum and therefore haven’t used inclusive language throughout. Kudos to all the SAHDs out there.

While I was pregnant with my first baby and still teaching, I remember talking to a couple of colleagues who were both dads, and saying how I was looking forward to a “break from working” when I went on maternity leave.  They had a good chuckle to themselves and warned me it wouldn’t be much of a break.

“Yeah, I know.  Of course, it’ll be hard looking after a baby”, I said quickly, thinking I understood. No. Nuh-uh.  I had no freaking idea.  I’m sure all mothers-to-be aren’t as clueless as I was.  I never had baby cousins, never babysat babies, never changed a nappy.  The first time I remember holding a baby, I was about twenty years old.  It had been really cute and it was sleeping soundly.  Years on I had held a few friends’ babies.  I had been warned that the sleep deprivation was not just like having a big night out until 4 am but ongoing and debilitating.  One of my friends had told me point-blank that she had never been so exhausted but somehow this all seemed to wash over me.  I was in my own world of ignorance, and it was blissful.

A few months ago, another friend asked if I was back at work.  I get it, that’s the question you ask.  I explained that being home with my two kids was enough work for the time being.  He went on to ask what I did all day.  Before all the mums get in an uproar, let me just say that the question was asked very matter-of-factly, with quite genuine interest.  I wasn’t offended but it did make me think, “What do people think I’m doing every day?”

The problem is, I do get to the end of my day sometimes and think, “What did I do?” because so much of what mums do are those regular, mundane tasks, but they do take all day sometimes!  So when posed with this question, I really wanted to make my friend understand.  I think my answer was something along the lines of: “I spend most of my day getting the kids food and then cleaning up after them and doing housework in between”. I didn’t want to bore him with all the details.

I remember wondering myself what Stay at Home Mums did all day before I became one.  What would I do with all that free time I would have?  I had visions of studying by correspondence, maybe learning French or doing a Masters in Teaching. In actual fact having my first baby was merely a challenge because I had to get used to life revolving around my little person.  This included breast-feeding round the clock, changing nappy upon nappy, and walking baby to sleep in the pram.  Many a cup of tea went cold and many a shower was abandoned as I ran to pick up my crying baby.  Until he slept through the night, any spare time was for rest, sleeping and, if in dire need, housework.

In actual fact, my first baby was a dream.  Despite some colic in the beginning and not sleeping through til 4 months old (which was actually quite lucky), he fed well and slept well both day and night.  By the time he was one, we were contemplating Baby Number Two.  What were we thinking?  I did go back to work part-time when Bub One was eleven months old and I did really enjoy it, but I had the luxury of two amazing mums myself who took him a day each, so he had only one day in Childcare.  This eased my mind a lot and with a second little one now, it is not so easy for grandmothers to look after two very energetic boys. 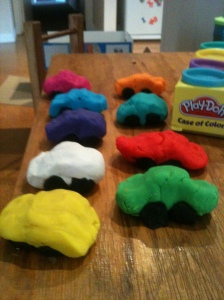 The year I was home with my two year old and newborn was hands down the hardest of my life.  My second little man had horrid reflux which meant he was up a few times a night until he was almost one.  He also didn’t sleep well during the day and was not the happiest camper.  Add to this a toddler who was frustrated because his younger brother had to be held all the time, to be fed or to be consoled.  I vividly remember the first time they were both screaming for me and I couldn’t make them both happy-I just sat down on the floor and cried.  It has happened many times since then that they both wanted me and I just have to deal with it.  We were all so sick so often that year, sometimes we were at the doctors a few times a week.  I’m not complaining because I’m very blessed that my boys don’t have any serious illnesses but I hope people can understand that even with healthy children, mums are busy.  That’s just the way it is.

Once life gets starts getting easier, we can quickly forget how difficult things have been.  I suppose that’s how so many of us end up going back for more children!  We can never underestimate how tough some of our mum friends’ (or indeed our friends’ in general) lives are.  That’s why it’s so important that we check in to see how they are going and offer help if we can – you need to look after your own self and family first, of course. 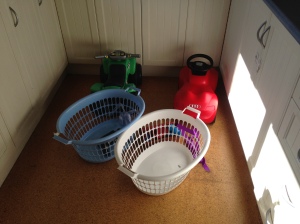 So what do I do all day?  As I write this, life is pretty good for me.  My kids are 22 months and 3 and three quarters and today is the one day a week they go to Childcare, for my sanity, and for their social skills too.  The other days we try to do some sort of activity in the morning and afternoon if possible to keep them busy and get them tired for good sleeps!  Since daylight savings started the day starts a bit later, between 7 and 8.  If pressed, we can be breakfasted, dressed and out the door by 9 am.  I try to have cleaned up and put the washing on before we leave. We go to the library, kinder gym, park, visit friends or just play at home or in the backyard.  Lunch is before noon so the youngest can sleep for (fingers crossed) a couple of hours during the day. I try to play with my older monkey and get more housework done when Number Two is asleep and then we usually go out again in the afternoon. Our “rush hours” as my sister aptly called them, are from 5ish to 7ish as we try to get everyone fed, bathed and in bed. (Sidenote: Yes, dressing a toddler is like dressing a moving octopus).

I’m lucky if I’ve cleaned up and am on the couch by 8.30 pm.  About half of the nights a week one or both of the kids wake up.  The youngest almost always wakes overnight the day of Childcare (today!). Due to separation anxiety or overtiredness maybe?  I think I have it pretty good though. I have a lot of respect for single mums, or mums who don’t get any time off.  Similarly, I think working mums are amazing – how do they do it??  It would be nice not having to share your lunch sometimes though!

I love it how my Naturopath refers to my being a mum as my job.  “Yes, this is understandable in your line of work”, she says sometimes.  It makes me laugh because I don’t know of anyone else who refers to being a mum as a job, just as if it were any other occupation.  It would be nice if it were afforded that respect more often!  Like many, I’m not “just a mum”.  I’m not too fussed if other people don’t see it that way because it is an amazing job. Anyway that’s what I do all day (and night!).  Hopefully this sheds some light for those who really want to know.  And thanks to that friend of mine, for REALLY asking. 🙂

5 thoughts on “What do Stay At Home Mums do all day?!”